An Interview with Dan Gardiner

In a Q & A session with Madison art collector, Ann Junkin, Dan describes his life-long art journey. He talks about his childhood art, his brief stop as an IRS data collector, and his many years as a full-time artist.

Dan, how long have you been making art?

Since I was a little kid. I remember my parents buying me those 64-color Crayola boxes, and I’d be thrilled by the oddball colors like Plum, Maroon, Maize, Olive, Periwinkle, etc. A few years ago, when I was visiting my mom in Detroit, I found a box of my childhood art and a lot of the scribblings were of the same subject matter that interests me today!

So, you were raised in Detroit?

Detroit was a great place to grow up in the sixties; I saw all the Motown acts at the state fair, the car culture, the pro sports teams – especially hockey. For years we drove into Canada to play youth hockey. It’s a shame how the city of Detroit has crumbled.

Did your parents encourage you as an artist?

Sure, but not inordinately. Drawing and coloring was just something I enjoyed, but no more than playing football in the street, listening to the Beatles, bike riding, and stealing fishing lures from K-Mart…the normal kid stuff. Eventually, I started getting attention for my drawings. We’d go up to Costanza’s Pizzeria on Friday nights, and the waitress would flip the paper place mat over so I could draw the customers and waitresses.

What age was this?

Maybe around seven? Actually, I still do this today, if there’s time before the shrimp cocktails arrive.  I started buying Mad magazines and really studying the great artists, and by the time I was in sixth grade I could imitate Mort Drucker, Jack Davis, and some of the others. 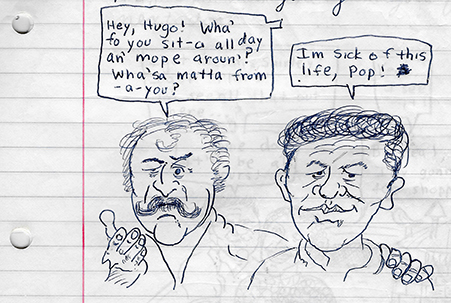 Did you benefit from having good art teachers?

Not so much. I got more encouragement from the regular classroom teachers. For example, I started adding charts, maps, and portraits to my history papers. In 8th grade, the smartest kid was Chris Hoskins, and he was always getting the highest marks for his papers. So, I decided I was going to top him on an upcoming Civil War paper. I added battle maps, portraits of the Generals, types of weapons…and the teacher asked if he could keep my paper.

After high school did you go to art college?

No, I went to the University of Michigan – I liked their football helmets and Ann Arbor was known as a hip town. I just assumed you couldn’t make a living as an artist, so I took every liberal arts course they offered and learned a lot about film, literature, and Poly Sci. A week after I graduated, the IRS hired me.

What did you do at the IRS?

I never understood my job, so to keep busy I drew pencil drawings of my fellow employees. I’d get called into my boss’s office, figuring I was about to get fired, but the guy would just say “Do me next!” I lasted there a couple years, until I visited my college roommate who had landed in Green Bay after graduation.

I liked Wisconsin immediately, and I’ve made it my home for 30 years now. I remember during my first visit, we stopped at a place called the Packer Tavern, across from the big paper mill. The bartender was talking about the blank wall outside and my pal said, “Dan here could paint you something.”  They only wanted the Packer “G” logo, real large, so they cut me a check for $500 and I painted it that weekend.

Then the owner called me with the bad news…the Packer Corporation lawyers had threatened him with a lawsuit, so the bar owner rehired me to paint it out and replace it with a big deer. So, it got me thinking “That was an easy $1,000! Maybe I should give this a try”… 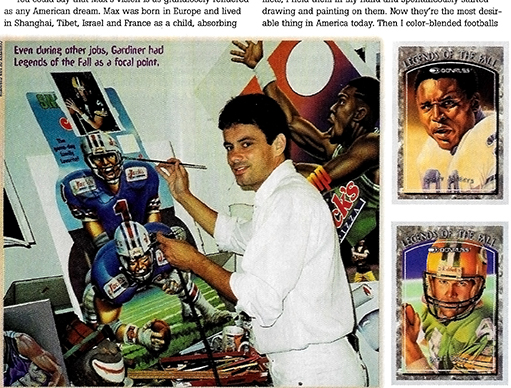 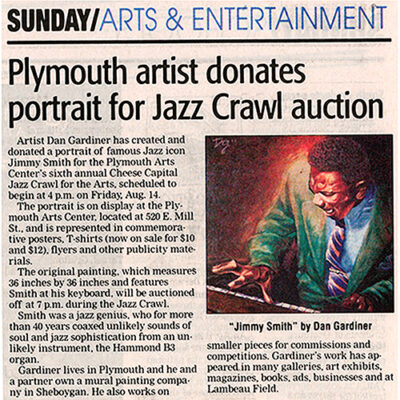 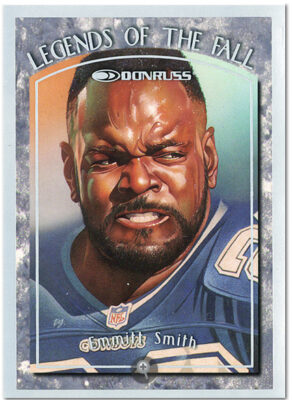 So, you settled in Green Bay?

Yes, this was in the 80’s and I taught myself to airbrush, which was a popular commercial art style then. All the ad agencies started using me…a Big Fish in a Small Bay!

You taught yourself airbrushing?

Well, I was able to teach myself by going to the library and getting books on the subject. Today, artists have YouTube, same idea. Back then, air brushing could also be used for all kinds of art. Remember the Topps Trading Cards kids used to collect and swap? I started sending sports art to magazines and became nationally known as the Sports Art Guy.

By the mid 90s I was cranking out sports portraits for different card companies. Then a pal called me to join five other artists painting murals for ISI, an interior design company in Fon du Lac.  That was the first real job I’d had for quite a while you know, with health insurance and time clocks. We traveled all over the country painting giant murals in schools and restaurants

I remember telling my co-workers “this job will never last…it’s too much fun, like 8th grade art class.” Sadly, I was right…the owner called us in one day and said the six of us were being replaced by a computer and a giant printer. 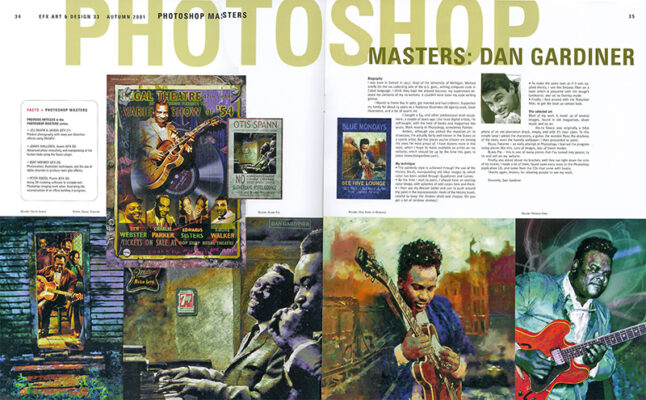 You’ve painted murals in Madison, no?

Yes, one of my former ISI co-workers and I started our own mural business. We were fortunate to be commissioned by UW Hospital & Clinics as new expansion took place. Several of our murals can be found in various locations around the hospital. We had several productive years.

I was online and saw this collage of the actress, Grace Kelly, done by a German artist, and it just flabbergasted me!  Then, like anything else, I learned through practice and soon found my own style.

How do you create a collage?

I begin with either cradleboard or canvas. I start by shooting a photo of an object, like an old Converse high top. Then I’ll look through old sports magazines for retro ads. I have my dad’s entire Sports Illustrated collection from the sixties, which provides great references. I scan everything into Photoshop and play around until I have a color sketch, then print out this early version of my final art. I’ll go through some fashion magazines with the high-quality paper, tear those up, making little piles by color – all the while looking for unique or unusual images I can use, such as cursive type that might resemble shoelaces. I use Liquitex Gloss medium as my glue, building up layers of torn paper to create a 3-D effect.

Even when I feel I’m close to being done, I often find a colorful scrap of paper on the floor that I want to add to the collage, so it can be hard to know when to stop. If the collage is a success, it looks pretty abstract up close with all the details, but almost photo-realistic from ten feet back! 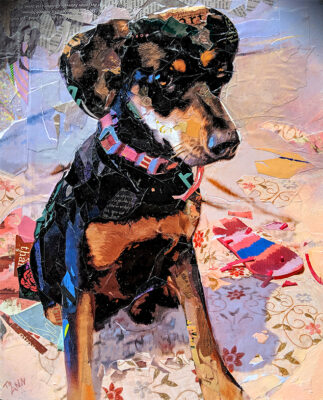